A raga or raag (IAST: rāga; also raaga or ragam ; literally "coloring, tingeing, dyeing"[1][2]) is a melodic framework for improvisation akin to a melodic mode in Indian classical music.[3] While the rāga is a remarkable and central feature of the classical Indian music tradition, it has no direct translation to concepts in the classical European music tradition.[4][5] Each rāga is an array of melodic structures with musical motifs, considered in the Indian tradition to have the ability to "colour the mind" and affect the emotions of the audience.[1][2][5]
A rāga consists of at least five notes, and each rāga provides the musician with a musical framework within which to improvise.[3][6][7] The specific notes within a rāga can be reordered and improvised by the musician. Rāgas range from small rāgas like Bahar and Shahana that are not much more than songs to big rāgas like Malkauns, Darbari and Yaman, which have great scope for improvisation and for which performances can last over an hour. Rāgas may change over time, with an example being Marwa, the primary development of which has gone down to the lower octave compared to the traditionally middle octave.[8] Each rāga traditionally has an emotional significance and symbolic associations such as with season, time and mood.[3]The rāga is considered a means in Indian musical tradition to evoke certain feelings in an audience. Hundreds of rāga are recognized in the classical tradition, of which about 30 are common.[3][7] Each rāga, state Dorothea E. Hast and others,[clarification needed] has its "own unique melodic personality".[9]
There are two main classical music traditions, Hindustani (North Indian) and Carnatic (South Indian), and the concept of rāga is shared by both.[6] Rāga are also found in Sikh traditions such as in Guru Granth Sahib, the primary scripture of Sikhism.[10]Similarly it is a part of the qawwali tradition found in Sufi Islamic communities of South Asia.[11] Some popular Indian film songsand ghazals use rāgas in their compositions.[12]

In the Hindu traditions, raga musical notes have personalities, and they are reverentially linked to gods and goddesses.[66] Left is Bhairava-Bharavi pair (Shiva), right is Vasanta raga-ragini (Krishna).
Rāginī (Devanagari) is a term for the "feminine" counterpart of a "masculine" rāga.[66] These are envisioned to parallel the god-goddess themes in Hinduism, and described variously by different medieval Indian music scholars. For example, the Sangita-darpana text of 15th-century Damodara Misra proposes six rāgas with thirty ragini, creating a system of thirty six, a system that became popular in Rajasthan.[67] In the north Himalayan regions such as Himachal Pradesh, the music scholars such as 16th century Mesakarna expanded this system to include eight descendants to each rāga, thereby creating a system of eighty four. After the 16th-century, the system expanded still further.[67]
In Sangita-darpana, the Bhairava rāga is associated with the following raginis: Bhairavi, Punyaki, Bilawali, Aslekhi, Bangli. In the Meskarna system, the masculine and feminine musical notes are combined to produce putra rāgas called Harakh, Pancham, Disakh, Bangal, Madhu, Madhava, Lalit, Bilawal.[68]
This system is no longer in use today because the 'related' rāgas had very little or no similarity and the rāga-rāginī classification did not agree with various other schemes. 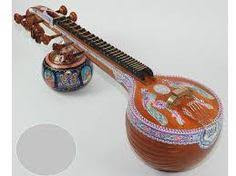